William Blake’s religious thought is notoriously challenging. Several recent studies, however, shed light on this area through particular attention to the theological and historical impact of British Methodism on his achievement. Two recent monographs deserve mention.

Jennifer Jesse, in William Blake’s Religious Vision: There’s a Methodism in His Madness (Lanham: Lexington, 2013), maintains that Blake works “against the backdrop” of Wesleyan theology. She argues that Blake critics have relied excessively on contemporary caricatures of the Wesleys, Whitefield, and Methodism generally rather than historically accurate portrayals of the movement.

Interpreting Blake according to his times, Jesse claims, allows for intriguing new interpretations of his works, particularly in the area of reason: “we see him affirming not only the same basic axioms as a Wesleyan view of reason, but also the logical insights and implications of those principles . . . he seems to correct Wesley’s Lockean empiricism by affirming the innate status of the Poetic Genius/imagination/spiritual sensation. But if Blake is ‘correcting’ Wesley here, he is also agreeing with the crucial goal toward which Wesley is driving—that the existence of spiritual sensation is necessary to account for what reason somehow already knows” (209). Blake emerges as a far more moderate and even somewhat evangelical figure in such a view. 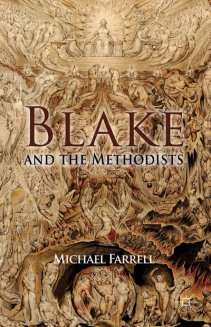 Michael Farrell’s Blake and the Methodists (New York: Palgrave Macmillan, 2014) finds much to value in Jesse’s vision of Blake as a “reasonable enthusiast” and calls her work “the most comprehensive study on the relationship between Blake and Methodism to date” (3), but he sees Methodism as only “one component” of a wider “eclectic theology” (29): “feeling is not the means by which we know God in Blake. It is therefore not a case of being infused with the Holy Spirit as in Wesley, but of working towards divinity through the labour of imagination—less an affective faculty than a perceptive or visionary one” (29, 195). Through a consideration of common sources (such as a mutual interest in John Milton) and parallel themes (such as regeneration in spirituality and artistic creation), Farrell places Methodism in coordination with other contemporary influences such as Moravianism and Swedenborgianism.

These two studies once again reveal the central place of theological and religious themes in British Romantic literature. Writers in Romantic England knew Methodism as a major social and religious movement of the times. The sermons, hymns, and other writings of Methodists contributed to the ever more apparent emphasis on inward vision, spiritual renewal, and the forms of creative imagination.

If you enjoyed this post, take a look at Romanticism and Islam!

1 thought on “Blake and Methodism”